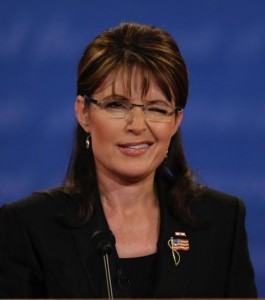 Sarah Palin, Republican Vice Presidential candidate and Governor of Alaska, represents archetypal whiteness (image from here). Her place on the ticket as been described as an effort to appeal to “women” voters but this characterization misses the very real way that she represents and appeals to white women and men. The “hockey moms” and “Joe six-packs” she relentlessly invokes in her speeches are cultural references to white people.  While there are a few black players in the NHL (e.g., Donald Brashear, Manny Malhotra, Jamal Mayers, George Laraque, Ray Emery, Jarome Iginla, Anson Carter , Kevin Weeks), hockey is an overwhelmingly white sport.  “Hockey moms” is meant to conjure an image of women like Palin herself, white and socially conservative.

Palin also asserts her representation of the group known as “Joe six-pack.” In a radio interview she said:

“It’s time that normal Joe Six-pack American is finally represented in the position of vice presidency.”

She’s repeated this reference multiple times, including in the Vice Presidential debate last week.  It’s a reference that’s meant to evoke “Everyman,” as William Safire noted in this 1998 piece (and, it’s not restricted to conservatives or Republicans).    Yet, the expression carries with it a particular – rather than a generic – referent.   The referent is to a white, working-class man, and, more specifically, to a white working-class man with an over-developed appreciation for televised sports and canned domestic beer.  It’s been interesting to watch and listen to Palin do the acts of translation necessary to transform this quintessentially masculine image into one that’s supposedly gender-inclusive of women.  Of course, little in the mainstream press has noted the gender-disconnect here, but has tried to take issue with Palin’s claim to be working-class since she and her husband Todd (the first dude) earned $249,000 last year.  But there’s no analogous clamor of critique of the whiteness of this term and the racial exclusion it implies.

Sarah Palin’s “cringeworthy” performance in a number of interviews, most notably the series of interviews with Katie Couric, suggest another element of her archetypal whiteness:  advancement despite a lack of verbal acuity.   We’ve seen this again and again with white people who don’t have the basic verbal skills you’d expect of a 5th grader, and yet they get promoted to higher and higher levels in government.   The most notable example in recent history is George W. Bush.  Any black man with his verbal ability would be relegated to cleaning office floors or driving a truck.   But not W., he rose to the highest office in the land.   And now, Sarah Palin is following in these well-worn white footsteps of promotion without ability.   In case you missed it, here’s some of what transpired in the interviews with Couric:

Questioned about her boast that being governor of a state that borders the frozen wastes of eastern Russia added to her understanding of foreign policy, she said: “As Putin rears his head and comes into the air space of the United States of America, where do they go? It’s Alaska.”

Asked if the US financial crisis was leading the country towards another Great Depression, her reply was: “Not necessarily this, as it’s been proposed, has to pass or we’re going to find ourselves in another Great Depression. But, there has got to be action – bipartisan effort – Congress not pointing fingers at one another but finding the solution to this, taking action…”

It is virtually impossible to imagine a black person – man or woman – with that lack of verbal ability or basic grasp of knowledge who would be considered for the vice presidency.     Black people have long recognized that to get ahead in a white world they have to work twice as hard as white people.  The flip side of this is the kind of half-assed performance we’ve come to expect from white people in high office in this country, people who are so arrogant that they believe that they don’t need preparation, education, and hard work to succeed.  Instead, they seem to cling to the comforting fiction that they are inherently blessed with some sort of “gift” of leadership that obsolves them from the need to read, speak and think in coherent sentences.     The winking, smiling hubris of the unprepared yet supremely confident Palin, combined with the images she conjures of  “hockey moms” and “Joe six-pack” makes her an archetype of whiteness.