It is interesting now that Senator Obama is not doing as well in numerous polls, with McCain leading in several and ahead now in the electoral vote estimates, some writers are talking about the “Bradley effect” and beginning to make arguments, albeit with less data, that I have made for many months now. They still seem afraid to call this the “white racism” effect, which it actually is, but at least a few are beginning 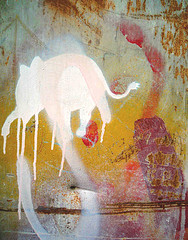 to raise the issue. (Photo: Tashland) Yet, they still do not understand just how uphill Senator Obama’s struggle really is. And they are not discussing at all the impact and significance, especially for African Americans, of a loss.

In a recent (September 25, 2008) New York Review of Books, Andrew Hacker argues a modest version of my argument about racist barriers under the vague title, “Obama: The Price of Being Black.”

After some initial discussion of voting barriers and other matters, as part of reviewing a publication on voting, he finally gets to the central problem for Senator Obama:

I’ve been careful so far not to use the word “racism.” The term itself has become an obstacle to understanding. Once white people hear it, they tend to freeze, and start listing reasons why it doesn’t apply to them. After all, most Americans admire Oprah Winfrey, like Tiger Woods, and respect Colin Powell. Yet racism persists, albeit not publicly voiced, especially in the belief that one’s own is a superior strain.

Wow! Here is one of the important analysts of “race” in the U.S., in his past work, using rare examples (which whites see as “exceptions to their race”) and backing off from calling racism what it actually is and accenting it front and center. Of course, even the word “racism” offends a great many whites. They do not wish to face the underlying reality of racial oppression in this society.
Then Hacker buys into “whites are now less racist” argument:

… not many whites regard Barack Obama as their inferior; effete or arrogant perhaps, but they don’t fault him on intellect. To some, indeed, he may seem too much the intellectual. Resentment of perceived black privilege is also involved, as we have seen with respect to affirmative action, and even fear of some kind of racial payback. Over half of a largely white sample told a Rasmussen poll that they feel Obama continues to share at least some of Reverend Jeremiah Wright’s positions on America.

Of course, many whites see Obama as their inferior, their racial inferior on numerous dimensions. And the poll cited makes that very clear. A white majority think Dr. Wright was a “dangerous black man” who “hates America,” and that is certainly inferiority for a great many whites. This hostile view of Black men, by the way, is nearly 400 years old now in this country, yet scholars and analysts seem reluctant to even call it out. Then Hacker cites polls:

… in an ABC News /Washington Post poll in June, 20 percent of the whites who responded said a candidate’s race would factor heavily in their vote, while 30 percent admitted to feelings of racial prejudice. If the Bradley Effect was at work, as many as one third of the voters may count race as important.

We see in the polls just how huge the barrier is for Obama, for presidential candidates usually win by less that 8 or so percentage points. A good point, but Hacker’s analysis seems very odd–that is, for a leading social scientist of racial issues like him not to pay attention in an important review for the general public to the substantial research data which show quite clearly that a majority of whites today, including a majority of young well-educated whites, still think and talk in very racist, blatantly racist terms, about African Americans.

Moreover, when I engaged in a long discussion with numerous otherwise savvy sociologists about the Obama presidential campaign over at the Contexts blog, I was the only one to discuss and consider these data on white racist thinking as likely blocking his election. Almost all there thought he would probably be elected. The other discussants seemed to think the data I cited about the extensiveness and impact of the white racial frame on white voters and voting can be more or less ignored–and generally moved on to discuss the significance of the black presidency.

Whites are not part of some “new racism,” for it is the same old racism of four hundred years. And why are the social science data on how deeply racist in their thinking a majority of white Americans still are, being so ignored even by social scientists discussing the Obama campaign? I predict that many social scientists will eventually have to face and analyze openly the deep US foundation of white racism between now and what seems like November’s increasingly likely loss for Senator Obama. (The Republican 527 attacks are just beginning again, and are trying to tie Obama again and again to the negative images of the old white racial frame. More are doubtless coming.)

Again, in my view the only way to stop that loss is for many people in his campaign and the media to take on and highlight the deep hidden racist thinking that lies behind many whites being so comfortable with McCain — and, most importantly, to accent aggressivly in every way possible, for white Americans in particular, the old liberty and justice frame this country claims to live by, but in fact does not. The only hope, as I see it, is to somehow get whites to listen “to their better angels.”