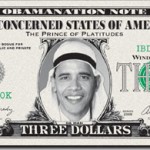 Jim Brunner, at the Seattle Times, has a story about a top Snohomish County, Washington, Republican Party official apologizing for their group selling at the Evergreen State Fair “$3 bills” that showed Senator Obama in the center in Arab dress and showing a camel. The official blamed a volunteer and said she had the bills removed when she heard about them.

Brunner reports that the $3 bills are sold nationally by an arch-conservative website (which has other racist and vicious attack paraphernalia). The website

feature signatures from “Teddy Kennedy” as chief socialism adviser and Al Sharpton as new spiritual adviser. Obama’s face, in the traditional Arab headgear, is pictured above the words “Da man.”

White racist thinkers and activists love to mock the speech of Americans of color, especially African Americans and Latinos. (Odd too that they clearly cannot hear their own accents since everyone speaks with an accent.) A Democratic Party supporter complained at the Republican booth, but was given a hard time:

The bills offended some passers-by at the fair, including Ronnie Thibault, a Monroe woman who said Republicans at the booth threatened to call security on her after she complained. . . . Susan Ronken, a volunteer at the nearby Democratic Party booth at the fair, also saw the bills, which were present at the booth for at least two days this week. “It was an absolute hate crime,” said Ronken.

Yes, these politicized hate crimes are already spreading like toxic mushrooms across the country. The Republican official was quoted as saying that

hopes the presidential campaign will avoid illegitimate personal attacks — such as insinuations about Obama’s religion or McCain’s age.

Yes, she balances the Muslim attack to an age critique of McCain, but without assessing the point about the former being the kind of hate crime that is often associated with racist violence against Americans of color. The explosion of politicized racist attacks in the next two months, I predict, will be extensive and huge. One can already find many racist political attack sites on the web targeting Obama, several with the N-word as part of their url.

In my view the only way to meet these attacks is openly and assertively, especially by people with influence and power. It is time for our media and our politicians to take these and the many other hate crimes in the US very seriously–as well as the deep white racial frame that makes them possible–and to discuss, counter, and act openly against these political hate crimes. They cannot be swept under the rug without making them much worse. 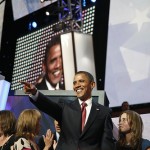