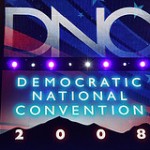 Audre Lorde wrote that “… what is most important to me must be spoken, made verbal and shared, even at the risk of having it bruised or misunderstood. That the speaking profits me, beyond any other effect” (excerpted here). Audre left us in 1992, but her legacy continues. Today, there’s a network of women of color (WOC) bloggers that are bringing the tradition of Audre Lorde to the digital age. Despite the disabling rhetorics about the digital divide, and the near fetishism of the white-male-mainstream-blogger, these radical women of color speak truth to power. And, since the New York Times is highlighting the work of one WOC blogger at the Democratic Convention (hat tip Pam via Twitter), I thought it would be a good time to highlight just a few of these brave women here:

Diary of an Anxious Black Woman

What About Our Daughters

Lots of these blogs are covering mainstream politics, such as the presidential election, yet these voices are rarely the ones that mainstream news outlets read and draw on for commentary.   Let’s hope that’s changing.  Perhaps these blogs can offer a different angle of vision in the social and political landscape, while providing a mechanism for speaking truth to power.