The US Census Bureau just released population projections that by 2050, minorities will be the numeric majority of the population. For Latinos especially gains in the percentage of the population are expected to increase dramatically. In an article on cnn.com, Dave Waddington, 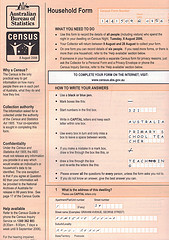 chief of the Census Bureau’s population projection branch, stated that “Who’s going to do the jobs that are characteristically held right now by certain types of people…All those things are subject to change.” As the white population decreases and the number of people of color increase, it is critical that we take a look at how systemic racism plays out in some of our major institutions, especially education. Change is coming and in so many cases needs to happen in order to prepare for a future that is more diverse (photo: Brewer).

Education is important to Latinos, and universities often claim to value diversity by actively recruiting students of color. This effort by universities can be interpreted either as a cynical effort to enhance the image of their school, or more benignly as a true reflection of a deeply held value of cultural difference on campus. Nevertheless, there is often concern at universities about recruiting and retaining students of color. However, through my interviews with Latino undergraduate students at three universities (“Southern University,” “Southwest University,” and “Midwest University”) across the country, I found that institutional discrimination continues to be a major impediment to student success. Universities are historically white arenas and they continue to be so today, regardless of their rhetoric about diversity.

My research showed that many aspects of the university are still white dominated. Almost universally, students reported an underrepresentation of Latino faculty on their campuses. It was difficult for students to find faculty members that looked like them or that they could relate to. When students did have Latino instructors, they were often non-tenured and/or teaching only in Latino areas (like Mexican American studies or Spanish.)

“I think that that does happen. There probably aren’t that many Latina professors or working as the dean or something like that. And there are more cooks and janitors that are Hispanics or—[Have you had any Latino professors?] No, I haven’t. [How do you feel about that?] I hadn’t really thought about it, but I would like to have a professor who has similar, I guess, cultural background as me. That could connect more I guess, but I haven’t really noticed.” – Southwest University Female 19

Increasing Latino faculty membership and tenure, as well as diversifying departments are important issues that institutions of higher education must face if they truly want to retain Latino students. Most of the adult Latino faces that students saw were those working in lower (and underappreciated) positions at the university. This included food service, landscaping, maintenance, and custodial work. Latino students saw this pattern of work as lowering their status at the university, as well as reinforcing what they see as low expectations from whites about their potential.

Latinos are also underrepresented in the curriculum and symbolically on some campuses. Though Southwest University has done a better job with symbolic representation in terms of artwork, statues, and celebrations that represent Latinos, all three campuses lacked diversity in their curriculum. Latino culture and history are not often discussed in general education classes (like American history) and instead are relegated to specialized courses. Though students are not denying the importance of those courses and departments, the result is that diversity becomes optional. If they do not take those courses, they will not learn about their people, and neither will whites. At Midwest and Southern University, symbolic representation was also a big issue. Latinos were rarely represented around campus in things like artwork and statues, though Southern University students were looking forward to the arrival of a statue of Cesar Chavez. Midwest University did a poor job of representing any students of color symbolically, but students noticed that when they did see art, it was often in the form of photographs from the university’s past—a past that did not include people of color. At Southern University, symbols of white racism are present in the statues of Confederate soldiers and buildings named after racists. These symbols (or lack of symbols) create an atmosphere that is not welcoming to Latinos. Often there are very few places on campuses that they feel they can call their own because of racialized space.

On all three campuses students could point to examples of institutional racism. Institutions of higher education, whether they are in the South, in predominantly Latino areas, or in located big cities, still organize themselves around white ideals and values. Students of color are admitted in greater numbers, but by and large the institutions remain a white place. Because of the changes that are being predicted about our population composition, the institution will have to change and adapt to a more diverse student body.