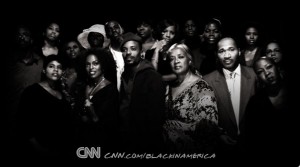 On July 23 and 24, CNN aired their much-hyped series entitled “Black in America,” which sought to examine the varied and wide-ranging experiences of African Americans in the contemporary U.S. The series sought to explore and document “what it really means to be black in America,” by focusing on the experiences of a wide range of everyday black Americans and the trials, tribulations, and triumphs that they face (image from CNN). The segment on July 23 focused on Black women; the segment on July 24 addressed Black men. Together, the two segments addressed topics including the high numbers of female-headed households, the challenges of public education, inner-city isolation, hip hop culture, and the staggering rates of imprisoned Black men.

While many people I know emailed reminders and made it a point to watch the show (my mother even marked it on her calendar!), I wasn’t overly excited about it. I figured that if CNN did an accurate job reporting what it means to be black in America, then they wouldn’t tell me anything I didn’t already know. If they did a poor job and misrepresented things (which they have done in the past), then I would just get irritated. But I was pleased to see that in many ways, CNN made some important points and addressed some key things that urgently need to be addressed.

One thing I appreciated most about “Black in America,” was the focus on the things that everyday Black people do to improve their communities and to try to make the world a better place. In the July 23 segment on Black women, the show followed a Black male high school principal who, troubled by the high numbers of Black students who do not complete high school, actually tracks down truants to encourage them to come back to school. Reporter Soledad O’Brien later profiled a Black woman cardiologist who does outreach to encourage Black people to get routine preventative health screenings and to overcome distrust of the medical establishment. (This distrust is well founded. The Tuskegee experiment, in which Black men were injected with syphilis and/or denied medical treatment in order to study the progression of the disease, is the most infamous example of Blacks being used for medical experiments in ways that violate ethical standards and human rights.)   The show also featured a Black male economics professor who, in an effort to address racial disparities in educational attainment, is trying a controversial experiment where he pays children for good grades in an effort to build strong study habits and an appreciation for the value of education.

Examples like these are an important counter to many of the commonplace myths about Black Americans that abound in popular culture, policy decisions and in everyday interactions. Many believe that Black Americans in general are lazy, unmotivated, and unwilling to take advantage of the opportunities available to them. To this way of thinking, the main challenge facing Black Americans is their refusal to exert any agency to change their circumstances. This perception does not characterize most African Americans. One of the most valuable contributions of “Black in America” is that it documented many everyday, ordinary African Americans who work hard for themselves and to make life better for others. This is a picture we rarely see in mainstream media, which disproportionately depict Blacks as perpetrators of crime rather than everyday Americans trying to make changes. (See Joe Feagin’s Systemic Racism for more discussion of this.)

I also appreciated the program’s emphasis on Black fathers, and their acknowledgment that contrary to popular opinion, many Black men are actively involved in their children’s lives and parent under unbelievably difficult circumstances. The show also made connections between the fact that while some Black men are absent parents, often this is a consequence of many complicated factors—cycles of parental abandonment, incarceration as a result of a racially biased criminal justice system—structural issues that are often overlooked.

Now for the problems: one glaring omission in “Black in America” is the absence of any Black (openly) lesbian, gay, bisexual or transgendered individuals. While I applaud “Black in America” for its attention to how gender and class are important factors in creating a myriad of experiences in Black America, I think the segment should have acknowledged that not all of Black America is heterosexual. Black LGBT individuals face issues and challenges in the Black community that stem from intersections of race, sexuality, and gender. Too often they are alternately overlooked or demonized, and CNN missed a valuable opportunity to speak to their experiences. How might the story on Black women have been changed had Soledad O’Brien spoken with the family of Sakia Gunn, the 15 year old Newark, New Jersey lesbian who was murdered in 2003 after refusing the sexual advances of men by identifying herself as a lesbian?  Gunn’s story shows not only the ways that homophobia impacts Black Americans, but the threat of violence that Black women face every day. This is another very important part of being Black in America that should have been included.

On a related note, the July 23 segment on Black women did not seem to focus very heavily on issues facing Black women. The stories in this segment included an incredibly poignant account of a single Black father in Brooklyn trying to maintain steady employment to keep his children in school, and his young son’s involvement in the experimental class where children were paid to earn good grades. Another story detailed a young woman who, abandoned by her father and searching for a father figure, ended up raising several children alone, and the impact that male abandonment can have on young women. A third story focused on black professional women’s struggles to find comparably educated Black professional mates, and the challenges of doing this given the high numbers of Black men who are incarcerated, uneducated, and unavailable.

While these stories definitely include Black women, I did not feel that there was a heavy emphasis on the ways intersections of race and gender create specific experiences for them.  In some ways, these stories still seemed to be more about Black men than Black women. In a profile of a Black woman who had no health insurance, Soledad O’Brien emphasized the difficulty this woman experienced maintaining her health when no stores in her neighborhood provided fresh fruits or vegetables, and the fact that without a car, she had to travel over an hour to get nutritious food. And, in a compelling quote that captures the essence of urban health disparities, the woman said that in her neighborhood, “it’s easier to buy a gun than a tomato.”   While this is definitely an important story,  it reflects intersections of race and class much more so than race and gender. I’m surprised that a segment on Black women did not discuss the fact that Black women are much more likely than white women develop and die from breast cancer, to develop uterine fibroids, and to give birth to low-birth weight babies (as Jessie posted about recently), and the studies that connect these issues to surviving daily onslaughts of racism and sexism. It’s also interesting that in this discussion of health, there was no mention of the fact that Black women are the fastest-rising group of new HIV/AIDS cases, are 26 times more likely to contract AIDS than white women, and that this occurs most frequently through heterosexual intercourse.   Finally, Black women experience sexual assaults at higher rates than women of other racial groups, yet are less likely to see their assailants prosecuted. From slavery on, Black women have enjoyed little ownership over their bodies and have had to combat issues including rape, forced sterilization, and limited access to birth control, so the current issues Black women face in this vein have clear historical precedent. Yet for some reason, these were overlooked in the segment that purported to focus on Black women.

Lastly, I felt that the July 24 story about race and education overstated, as mainstream media outlets frequently do, the “acting white” phenomenon among Black Americans. The show reported that for many Black Americans, school success is perceived as “acting white,” which leads African Americans to shun it in favor of pursuing other routes to popularity. The “acting white” argument, first introduced in academic circles by Signathia Fordham and John Ogbu “Black Students’ School Success: Coping with the Burden of ‘Acting White,’” has been retested and analyzed among many other researchers who find little empirical support for this theory. In short, Fordham and Ogbu state that Black students don’t perform well academically in part because they see it as “acting white,” and because they recognize that in a racially unequal society, there will be little reward for their educational efforts. Yet numerous other scholars have performed more empirically sophisticated tests of this theory and have gleaned different results. In several articles, Jim Ainsworth and Douglas Downey have argued that Black students who earn high grades are very popular among their peers and believe that their educational gains will earn them occupational rewards down the line. Sociologist Karolyn Tyson has also argued that Black students with high grades are popular among peers, and that their academic achievement is met with positive regard rather than negative sanction. This is not to say that Black children never taunt others with “acting white,” but that a well-documented body of research suggests that this label may be given for reasons other than academic success, and that it is likely not the deterrent to academic achievement that Fordham and Ogbu initially suggested. It is rather unfortunate that CNN ignored a body of social science literature that challenges this theory in order to perpetuate what cultural critic Michael Eric Dyson has referred to as “the academic equivalent of an urban legend.”

Overall, I felt that the CNN special told me little I didn’t know about being Black in America—which, to me, means that for the most part they accurately reported many of the varied, diverse experiences of African Americans in contemporary society. For other educators, this series could be a useful tool for initiating discussion about race, class, and social structure in America. The series definitely challenged some—not all—of the preconceptions and stereotypes that persist about Black Americans. It is worth watching, but definitely warrants watching with a critical eye.