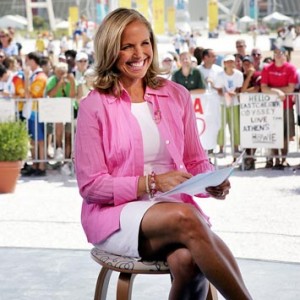 News anchor Katie Couric has made news of her own recently with her analysis of the male-dominated news business (image from here). Couric didn’t stop there, though. She went on to suggest that there is sexism in the news business and beyond in the larger society, but that “sexism is worse than racism.” Here’s the full quote from Couric, via Politico:

“Unfortunately I have found out that many viewers are afraid of change. The glory days of TV news are over, and the media landscape has been dramatically changed. News is available now for everyone, everywhere, all the time, and everybody fights for the last pieces of the shrinking pie. The corporate pressure and the ratings terror are intensifying all the time, and the situation is not simple. I find myself in the last bastion of male dominance, and realizing what Hillary Clinton might have realized not long ago: that sexism in the American society is more common than racism, and certainly more acceptable or forgivable. In any case, I think my post and Hillary’s race are important steps in the right direction.”

With this assessment, Couric joins a long and growing list of white-women-who-don’t-get-it, when it comes to racism, such as Geraldine Ferraro. As Adia Harvey wrote here back in March, “Making the case that sexism is worse than racism or even that it is the primary source of women’s oppression ignores the experiences of minority and working-class women (who simultaneously contend with racism and capitalist exploitation) and ultimately alienates these women from feminism and feminist causes.” Couric, like Ferraro, is no doubt speaking from her own experience in which she certainly encounters sexism but doesn’t encounter racism. Why would she? Given her skin-and-class privilege, it’s almost certainly the case that the only kind of inequality Couric faces in gender inequality. And, she’s right to call it out for what it is. But this doesn’t mean that Couric is right about racism, or about sexism’s significance relative to racism.

Instead, Couric’s comments simply reveal that she’s clueless about the pervasiveness of racism in this society because she’s never encountered it herself.

She’s not alone. Another white woman in the news recently who has revealed her lack of recognition about racism is Elisabeth Hasselbeck, a celebrity co-host on the television show “The View.” In an exchange with Whoopi Goldberg last week about the use of the “N-word” and the fact that racism is pervasive in our society, Goldberg asserted that she and Hasselbeck live in “different societies” at which point Hasselbeck broke down in tears. This isn’t the first time that Whoopi and Elisabeth have gotten into in about racism on the show. Back in March of this year, when Hasselbeck said she was “offended” by the fact that Barack Obama referred to his grandmother a “typical white woman” who would be fearful if she saw a group of African-Americans on the street. Elisabeth explained that she is a “typical white woman” herself and would never be afraid of a group of black kids on the street. Whoopi, however, didn’t buy it, and called her on it. At the end of the exchange, Hasselbeck pleaded with Whoopi for a “rule book on racism,” basically admitting that she didn’t get racism.

I think it’s understandable, really, that the privileged white women like Couric, Ferraro and Hasselbeck don’t get racism given how little analysis of it there is in our society.