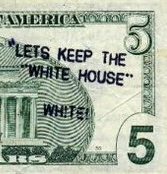 Last week a local paper here reported a story about a five dollar bill that someone found stamped with “Let’s Keep the White House White!” (story and image from:Staten Islander). In a similar vein, a vendor at a GOP event was selling buttons that read, “If Obama is President, will we still call it the White House?” All this drives home the point that Joe has made here about the importance of race and the white racial frame in this election. Another sociologist, Andrew Greeley, has recently made a similar point in an article for the Chicago Sun-Times. Greeley writes:

How many of the male readers of this column who are habitues of bars, locker rooms, commuter train bull sessions, pool rooms and men’s clubs have not heard the indigenous racial slurs of such environments applied to Obama?

And surely some of the explicit chatter during the campaign was racist, especially the obsession with the various clergy who mounted the pulpit of his church. By what stretch of sick logic could the candidate be responsible for what his clergy said and did?

Certainly there are solid political and personal reasons that some Americans might have had for voting against the senator that would not be in principle racist. He is one of the most “liberal” members of Congress. He stole the election from a woman who was entitled to it. He is one of the “boys” beating up on the female candidate. He is a not a patriot dedicated to final victory in Iraq. He is weak on national security. He lacks experience. He supports abortion. Yet behind these arguments, might racism lurk?

The point is that racism permeates American society and hides itself under many different disguises. The nomination of an African-American candidate was a near-miracle. Only the innocent and the naive think that the November election will not be about race. [emphasis added]

Someone should get Greeley a copy of Two-Faced Racism, as his analysis seems to echo many of the points in there. Unpersuaded by this analysis, The Bad Idea Blog takes on Greeley, and advocates what could be called an “ignore it and it will go away” approach that is popular among whites:

Race as a subject in politics is a sort of catch-22. If you don’t pay much attention to it, then people can later argue that you ignored a really important sub-text. It could be, as some fear, that a considerable number of racists will quietly vote against Obama this year. But on the other hand, making a lot of noise about race is as good a way as any to ensure that bitter racial disputes will come to the fore, and dominate the debate in an ugly way. Based largely in innuendo and interpretation, along with healthy doses of cultural disconnect (which is not the same thing as racism), racial tensions in politics tend to feed on themselves.

And in any case, if racists really are likely to quietly vote against Obama, it’s hard for me to see what making a significant fuss about it is going to accomplish. If people consciously act out of secret racist motives, then aren’t they quite unlikely to change their votes because of some general accusation of widespread racism? And if they subconsciously have racial motives, as Greeley alleges, then calling them out on it isn’t going to make people already in denial more self-aware: it’s just going to make them feel insulted and see Obama’s defenders as taking cheap shots for petty advantage.

I guess I just don’t see what good focusing so much on the problem would do (aside from firing up the Democratic base) no matter what you think the level of secret or overt racism at play is. If you think that Obama’s candidacy faces its greatest hurdle in some sort of ubiquitous American racism, then fine. No one can easily prove or disprove that view… but what can we really do about it aside from kvetch?

It makes far more sense, in my mind, for Obama’s well meaning allies to give up on bemoaning racism, and focus on just convincing people like the man and his policies directly. If people are quietly racist, then the best cure is for them to discover that they like and respect the candidate who happens to be black.

It’s hard to know where to start unpacking the bad ideas from this blog post, but the upshot here – that it’s better for “well meaning allies to give up on bemoaning racism,” seems egregiously misguided not to mention incredibly naive about matters of race and racism in the U.S. It’s as if racism had no history before this election cycle. What’s perhaps more pernicious in this sort of perspective is the way that white racial frame get perpetuate in statements like that “race as a subject in politics is a sort of catch-22” and “I guess I just don’t see what good focusing so much on the problem would do.”  This is very typical of the way that whites in the mainstream approach any discussion of race and racism: ignore it and hope it goes away.   At the same time, this sort of view makes the logical error of assuming that “race” an analytical category that only applies to “non-whites,” thus failing to apply a racial analysis to whites and white behavior and thinking.   It really seems as if whites are encumbered by white privilege in the sense that it prevents them from thinking critically about (their own) race and racism.

There are some writers out there who are taking a more nuanced view of whiteness in this election cycle.    For example, in a really thoughtful piece by June Kronholz, called “Racial Identity’s Gray Area,” in the Wall Street Journal, she does a nice job of illuminating the ways that the definition of “whiteness” has shifted historically.   To her credit, Kronholz notes the privileges attached to whiteness as when she writes:

Whiteness and the privileges that came with it were so closely guarded that in 1912, a House committee held hearings on whether Italians were really Caucasian….

Race is a malleable category, as Kronholz notes in this article, but whiteness and the privileges that attach to it endure.   What we need is more critical thinking about race, racism and whiteness, not less.