Somewhere along the line, whites in the Pacific Northwest got a reputation for being more liberal and open-minded than those in the rest of the country. A recent newspaper story coming out of Seattle suggests that this is probably one more U.S. myth. A 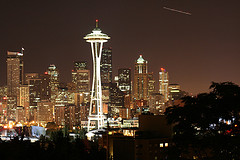 while back, Seattle Public Schools Superintendent Raj Manhas created a diversity department and hired an experienced psychologist Caprice Hollins, with a background in teaching diversity workshops and providing crisis-intervention services. She made some important and creative attempts at change (photo credit):

During her tenure, hundreds of district employees attended diversity workshops, the district began addressing the “discipline gap,” and scores on the Washington Assessment of Student Learning showed some limited progress in closing the achievement gap in some subjects.

Yet, when she started to do a serious job of dealing with the racist practices and mythologies of some white folks in Seattle, she ran into problems:

Hollins has earned the most attention for her missteps. She was at the center of a June 2006 brouhaha over a controversial page on the district’s Web site that suggested that planning for the future, emphasizing individualism and defining standard English were examples of cultural racism.

No text for this letter is provided in the newspaper article, but there is significant literature (see references here and here) on how “standard English” is a really just a term for “white middle-class English,” which is in fact just one of many dialects of English. (All speakers of English speak a dialect, and they also all speak with an “accent.”) Much of the “values” emphasis in schools and the media is in fact a type of cultural racism because many “values” that are accented are those chosen by powerful whites  and with white interests in mind. The issues here are not only, which values? but also, who chooses? The Seattle newspaper article continues thus:

After her office sent two district staffers and 20 high school students to a three-day “white privilege” conference in April 2007, complaints led the Department of Education to investigate whether the district had properly used federal grant money to pay for a portion of the trip.

As one who attended the recent “white privilege” conference, I can  say that it was education-oriented and is exactly what U.S. teachers and students need to open their eyes to the ways in which various forms of racial, gender, ethnic, and heterosexist hostility and discrimination work in this society. This conference has speakers of many kinds, including academics talking about research, artists and poets from many marginalized groups doing their thing, workshops on a great array of racial, ethnic, gender, heterosexist topics, and very good book and information displays. About 1100 people attended the one this year in Springfield, Massachusetts. (It meets next in early April 2009 in Memphis, Tennessee.) The newspaper account continues:

And in November, Hollins was roundly criticized after she sent out a memo to teachers that listed “myths about the First Thanksgiving” and noted that “for many Indian people, ‘Thanksgiving’ is a time of mourning … As currently celebrated in this country, ‘Thanksgiving’ is a bitter reminder of 500 years of betrayal returned for friendship.”

So, whites even in liberal Seattle cannot handle the truth about U.S. history. This is pretty tame educational stuff, actually, when you consider that those early colonizing decades involved much genocidal action by those white English colonists against Native Americans, which we hide and/or misrepresent now as we as a country celebrate at Thanksgiving. According to the Seattle  newspaper report Hollins has been terminated:

Seattle Public Schools has eliminated 16 central-office positions in a money-saving reorganization that included removing the director of its controversial Office of Equity, Race and Learning Support. . . . Spencer, the district spokeswoman, said the department wasn’t being eliminated because of any of those incidents. Rather, district officials want to make sure that staff members in all departments share responsibility for promoting equity and diversity, she said.

Seattle administrators are not saying why they really terminated her, but in the past they certainly have seemed sensitive to the feelings of powerful white folks whose mythological views of this society’s past and present are mildly encroached upon.

The Atlanta-Constitution is reporting that a suburban Atlanta bar owner is selling “Obama ‘08 Curious George” t-shirts.

The bar owner, Mike Norman, asserts that the t-shirts are not intended to offend. According to the report, Norman both “acknowledges the image’s Jim Crow roots” yet “sees nothing wrong with depicting a prominent African-American as a monkey.” About a dozen protesters gathered outside to challenge the racism of the t-shirts(pictured here, photo credit), yet the bar owner is not responsive to these charges. In fact, he seems emboldened by them. Apparently, he believes that he’s providing a public service, reminding people they have a right to offend. “This is my marketing tool,” he said.