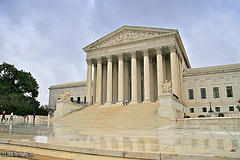 In an item related in many fundamental ways to the protests yesterday, the New York Civil Liberties Union has filed a lawsuit against the NYPD for its “stop and frisk” practice on behalf of a New York Post reporter, Leonardo Blair (pictured here, photo from NYPost).

In an ironic twist, the New York Post, a conservative rag owned by Rupert Murdoch, the same day ran an editorial in favor of the NYPD’s “stop and frisk” policy, asserting that any decrease in this racially biased practice would result in “crime and chaos.” The reality of living in a police state – and make no mistake, New York City is a police state – is that you never leave home without ID. If you don’t have state-issued ID on you, then you’re subject to being detained by the police until they can “verify your identity.” And, once they stop you, even without probable cause, they collect your name, address and date of birth for their database. But of course, it’s a policy that doesn’t get applied equally. As a white woman that frequently passes for straight, I often skate past those sorts of searches. My fellow New Yorkers who are black and brown, like the reporter in the NYCLU’s lawsuit, are not so fortunate. Leo Blair, a Jamaican immigrant and graduate of the Graduate School of Journalism at Columbia University, tells his own story of what happened when he was stopped by the police (from the NY Post):

I was just trying to get home.

It was 8:20 p.m. Wednesday, and I had just finished parking my 1993 Toyota Camry along Arnow Avenue in the Allerton section of The Bronx, where I have been living with my family since graduating from Columbia University last May.

Less than a block from my door, I heard a car’s squeaking brakes. I would have ignored the sound if I hadn’t seen an NYPD squad car out of the corner of my eye. I was relieved for a moment – until I saw the officers’ faces.

“Can you tell us what you were doing coming from that car?” asked the driver, a Hispanic officer whose name I later learned was Castillo.

The street was virtually empty. Officer Castillo jumped out of the car.

“Do you understand English!” he demanded. “Answer the question!”

“No, no hablo ingles,” I quipped. Under normal circumstances, I wouldn’t have said that to any cop, but I found his tone surprising and insulting.

Officer Castillo peppered me with questions in Spanish until I interrupted: “What do you mean by ‘What was I doing coming from that car?’ That’s my car!”

“Put your hands in the air!” he shouted. My arms shot up. He frisked me. His partner, Officer Reynolds, rifled through my rucksack.

The search ended quickly and, thinking they were done, I let my hands fall.

“Did I tell you to put your hands down?” Castillo barked.

He pinned my left arm, cuffed my wrist while ordering me to put my hands behind my back. His partner then took away my cellphone, which had started ringing in my pocket.

“C’mon, man,” I said. “I live right there. Let me call my aunt and uncle inside the house.”

I felt like I was being kidnapped. Castillo told me I was guilty of “disobeying an order.”

Sitting in the back of the squad car, a million thoughts were exploding in my head: What if I told them I just graduated from Columbia with a master’s degree in journalism? That I was a reporter with The Post? Should it matter?

“What did I do?” I asked when we arrived at the 49th Precinct station house. “Why am I being arrested?”

“Keep walking. This is not an arrest. You’re getting a summons,” Officer Castillo said.

Inside, Officer Reynolds shoved me into a cell. Digging through my bag, Officer Castillo picked out my driver’s license and said, “Look at this. He is not even from the projects.”

I angrily shouted, “Because I am black that means I’m supposed to be from the projects? That’s profiling and you know it!”

When Officer Reynolds returned, I again asked why I had been incarcerated. “This is not incarceration. Do you know what incarceration means?” he said.

I unloaded: “I have a master’s degree from Columbia University. I am a reporter for the New York Post. What do you mean this is not incarceration?”

“Now I understand what black people mean in this country when they talk about things like this,” I said to Officer Reynolds.

“That’s what makes it so shameful,” I said. “You stood there and watched him cuff me for no reason and you said nothing.” He walked away.

“You will see on the summons,” he said. The two pink slips I received showed complaints for making “unreasonable noise” and “disobeying a lawful order.”

Most black men, and many black women and Latino men and women, in New York have a story similar to Blair’s. Very few white people have similar stories. And, there is data that gives a fuller picture to the racial disparity of “stop and frisk” racism. According to data released earlier this week, New York City police officers stopped more people on the streets during the first three months of 2008 than during any quarter in the six years the Department has reported the data.

In 2007, the NYPD stopped about 469,000 New Yorkers – almost 1,300 people every day. Eighty-eight percent were completely innocent. Though they make up only a quarter of the City’s population, more than half of those stopped were black. Another 30 percent were Latino. Though whites make up more than 35 percent of New York City’s population, they were only 11 percent of those stopped. In 2006 and 2007, blacks and Latinos were the target of about 90 percent of the nearly one million stop-and-frisk encounters.

The NYCLU’s lawsuit also challenges the legality of a database the NYPD maintains with the names and addresses of every person stopped and frisked by the police, even though more than 90 percent of those people, like Blair, have done nothing wrong. That police database likely now has the names and home addresses of over one million law-abiding New Yorkers, as I said, this is what it’s like to live in a police state.