Social psychologists Nyla Branscombe, Michael Schmitt, and Kristin Schiffhauer have reported on a very interesting study on how whites’ racist views are heightened when they are pressed to think about their white racial privilege. 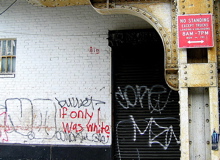 In their experimental studies, white undergraduates who highly identified with being white and who were pressed to think about white privilege (compared to controls and those who were asked to think about white disadvantages) responded with enhanced racist attitudes as measured by a modern-racism scale. The white students did this, apparently, to further legitimatize in their minds their white privilege and society’s racial inequality. Thus, those who strongly identified as white justified their privileged status by increased denial of the existence of discrimination and related racial views. In addition, this effect was found to be independent of conservative-liberal political orientation, indicating that their denials of discrimination did not reflect a sense of some violation of conservative political principles (photo credit).

These data not only show critical aspect of the contemporary white racial frame we often discuss here but also fit well with social science interpretations stressing that racial ideas and prejudices are not individualistic but connected to a sense of white-group position—an idea accented by sociologist Herbert Blumer. There are interesting societal implications to speculate on here. The researchers suggest from their data that whites may be most likely to assert or display openly their blatantly racist attitudes during times of social change, especially when there is significant likelihood of upward mobility for people of color that threatens their white identity or their white privileges.

Their data also point up the continuing, overtly racist ideas, about a range of racial issues, among many young college-educated white Americans—the ones who, according to numerous media and scholarly pundits, are supposed to be very nonracist and the hope for a nonracist future for this country. Such data are not encouraging, but few public commentators seem willing to confront or discuss the large amount of social science data on continuing white racism in the US.