There is an excellent interview of Dr. Jeremiah Wright, who is now speaking out about the stereotyped and hostile, and mostly white, attacks on him, including the many distortions of his ideas and sermons on racial matters. The interview was done last Friday, April 25, 2008, and I highly recommend it (and the full texts of Dr. Wright’s sermons too), if you want to understand just how white-racist most of the attacks on Dr. Wright have been.

In his interview Moyers asks this question (photo credit): 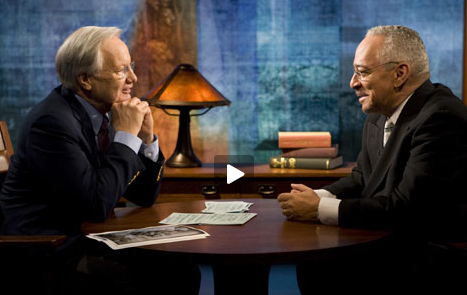 One of the most controversial sermons that you preach is the sermon you preach that ended up being that sound bite about Goddamn America.

And then provides the listerners with a significant segment from the end of Wright’s sermon:

Moyers asks: “What did you mean when you said that?” Dr. Wright responds with this rather obvious comment, that is obvious to any open-minded person who listens to the whole prophetic sermon itself (which very few critics have, it seems):

When you start confusing God and government, your allegiances to government -a particular government and not to God, that you’re in serious trouble because governments fail people. And governments change. And governments lie. And those three points of the sermon. And that is the context in which I was illustrating how the governments biblically and the governments since biblical times, up to our time, changed, how they failed, and how they lie. And when we start talking about my government right or wrong, I don’t think that goes. That is consistent with what the will of God says or the word of God says that governments don’t say right or wrong. That governments that wanna kill innocents are not consistent with the will of God. And that you are made in the image of God, you’re not made in the image of any particular government. We have the freedom here in this country to talk about that publicly, whereas some other places, you’re dead if say the wrong thing about your government.

Then they discuss some of these issues further:

BILL MOYERS: Well, you can be almost crucified for saying what you’ve said here in this country.

REVEREND WRIGHT: That’s true. That’s true. But you can be crucified, you can be crucified publicly, you can be crucified by corporate-owned media. But I mean, what I just meant was, you can be killed in other countries by the government for saying that. Dr. King, of course, was vilified. And most of us forget that after he was assassinated, but the year before he was assassinated, April 4th, 1967 at the Riverside Church, he talked about racism, militarism and capitalism. He became vilified. He got ostracized not only by the majority of Americans in the press; he got vilified by his own community. They thought he had overstepped his bounds. He was no longer talking about civil rights and being able to sit down at lunch counters that he should not talk about things like the war in Vietnam.

BILL MOYERS: Lyndon Johnson was furious at that. As you know-

REVEREND WRIGHT: I’m sure he was.

Wright then adds how angry people, many white and some black, got at King for telling the truth about racism and militarism in the Vietnam era (just like today):

And that’s where a lot of the African-American community broke with him, too. He was vilified by Roger Wilkins’ daddy, Roy Wilkins. Jackie Robinson. He was vilified by all of the Negro leaders who felt he’d overstepped his bounds talking about an unjust war. And that part of King is not lifted up every year on January 15th. 1963, “I have a dream,” was lifted up, and passages from that – sound bites if you will – from that march on Washington speech. But the King who preached the end of- “I’ve been to the mountaintop, I’ve looked over and I’ve seen the Promised Land, I might not get there with you,”- that part of the speech is talked about, not the fact that he was in Memphis siding with garbage collectors. Nothing about Resurrection City, nothing about the poor.

Wright continues by making the point that prophetic critiques of government wrongdoing are morally necessary, and common especially in the Black church. It is time for this country to listen, especially its nonblack citizens (Black Americans seem mostly in agreement with him), for the social science data show that Dr. Wright is right about racism in the United States and about government collusion in that systemic racism to the present day.