The Empire State Coalition of Youth and Family Services has just released a new report most comprehensive study of youth homelessness in New York City in decades was released recently, providing what some say is the first realistic account of one of the city’s most vulnerable and misunderstood populations. This is a subject near to my heart since I do a lot of volunteer work (and, in true sociological fashion, a research project) with these folks. The reason I mention this report here is that it’s both fascinating from a sociological standpoint, and deeply disturbing from a racial justice perspective. From a sociological research perspective, it’s a huge methodological challenge to even count homeless youth because they aren’t easily identifiable (on purpose) and they don’t conform to the prevailing cultural image of what a homeless person looks like. Here’s a relevant excerpt pulled from City Limits:

“One of the things young people are very good at is fitting in. It’s much harder to identify youth homeless on the street,” said Hirsch. She recalled one young homeless person who used to get dressed up to sleep on the subway, so as not to let on that he was homeless.

And, from a racial justice perspective, it’s telling that homeless kids are from “marginalized populations,” again from City Limits:

“One of the report’s most striking findings, say youth service professionals, is the significant overrepresentation of certain marginalized populations among the ranks of homeless youth in the city—particularly those who identify themselves either as black, or as lesbian, gay, bisexual or transgender (LGBT), or those who have experience in the foster care and criminal justice systems. Almost half of respondents identified as black and close to a third identified as homosexual or bisexual. More than a quarter reported time spent in foster care, jail or prison. ….Additionally, half of the young people interviewed for the report did not have a high school diploma or GED.”

There are a number of things to note here. Perhaps the first and most obvious is the total, systemic failure here of multiple institutions (economic, religious, familial, political, educational, criminal justice). To continue stating the obvious, these institutional failures have the strongest impact on those in society who are the weakest and most vulnerable – young people. In addition, there are lots of ways overlapping systems of oppression are at work here, including racism and homophobia. Unfortunately, the way this report is written it makes it sound like “black” and “LGBT” are separate categories – as if these kids are either black or LGBT – and as I and Adia have written about here before – this kind of “either/or” thinking doesn’t help clarify but rather clouds our understanding of the way oppression works. For my experience working with homeless kids who identify as LGBT here in New York City, they are overwhelming Black and Latino. Often times what this means is that these are kids who are not only pushed to the margins of society because of race and poverty, but they’ve also quite literally been pushed out of their families’ homes and onto the streets because of gender/sexuality, that is, because they identify as lesbian, gay or bisexual or they are gender-non-conforming in one way or another.

In my view, religious institutions have a special burden to bear in perpetuating these overlapping and interlocking systems of oppression. It’s frequently the case that parents who have pushed their children out of the home and onto the streets refer to religious edicts or “God’s will” when doing so, citing highly-regarded religious leaders (even those formerly in the Hitler youth).  Government institutions add to this burden as they refuse to fund places that house homeless LGBT-identified youth, citing the “lack of gender segregated facilities” as a reason. In a facility that houses Black and Latino youth, pushed out of their homes, pushed out of the traditional shelter system (where they often encounter violence based on gender-identity and/or homophobia), and frequently pushed out of foster care for not conforming to gender norms, it’s hard to know what meaningful purpose is served by offering a ‘gender segregated’ facility. (And, indeed, it would be hard to know how to enforce such segregation for people who embody a more complex gender identity than a simply binary of “either/or,” male/female.) 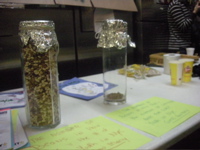 So, it’s organizations like MCCNY, part of the world’s largest queer-organization (yes, a religious organization) and one of the rare racially-integrated social institutions in the U.S., that take up the slack here by opening their basement to allow a few kids each night to get off the streets and sleep inside, have a hot shower, and a meal. (Pictured here: an illustration of the disparity between the number of homeless LGBT kids each night in NYC and the number of available beds, photo credit: Jessie Daniels).

The further irony is that the racism, class-based elitism and well-founded anti-religious sentiment among most affluent and white gays and lesbians, makes private fund-raising for homeless LGBT kids that’s housed in a church a decidedly uphill struggle. Thus, kids of color who identify as LGBT face multiple vulnerabilities that are rooted in interlocking systems of oppression. The combination of racism and homophobia pushes many of these kids into further vulnerability for health risks and violent attacks, as this article explains:

The fact is that racism, poverty and homophobia are damaging. And, these damaging consequences are all the more telling in the lives of homeless youth in New York City.