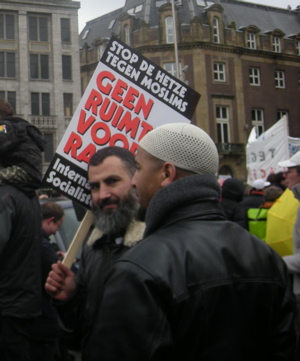 The rise of Somalian-born and Muslim-raised politician Ayaan Hirsi Ali is also important to understanding the context of race, gender and anti-racism politics in Holland.  Ali, a former Member of Parliament in Holland (and current U.S. resident), is also a radical opponent of Islam based on gender oppression – her own experience and on behalf of other Muslim women – and what she views as the violent and intolerant core of the religion.    In the U.S., Ali has been deployed by the right-wing to put a more respectable (and visibly black, female, Muslim, African) face on anti-Islamic sentiments.   And, yet somehow, the advocacy for gender equality gets lost in all that rhetoric within most of the mainstream reporting about her.   Still, Theo Van Gogh and Ayaan Hirsi Ali are forever linked because of the note that Mohammed Bouyeri penned then stabbed into Van Gogh naming Ali as an enemy of Islam.

What’s relevant here for discussing anti-racism is that the van Gogh murder was widely interpreted within Dutch society as bringing to an end the Dutch dream of a multicultural society (for more on this, see Ian Buruma’s Murder in Amsterdam).  This is the way the German magazine Spiegel describes this moment in Dutch culture:

“From one day to the next, the Dutch realized that they had long ignored a significant problem. The country had more than a million immigrants, most of them from North Africa, who were increasingly isolating themselves from or feeling marginalized by society the longer they lived in the Netherlands.”

The use of language here is interesting in that it locates the source of the Dutch problem within the immigrants themselves who are “isolating themselves” or “feeling marginalized” by “society.”  There are not actors here, causing any of this.    This sort of framing is also what the protests were intended to address. 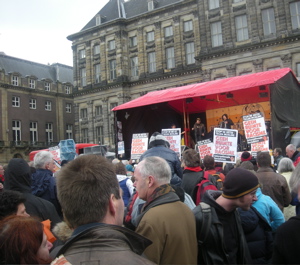 It is into this mix that Geert Wilders emerges with his Islamaphobic film.  Even before the film’s release, Prime Minister Balkenende of the Netherlands insisted that his country did not share Wilders’ views; and every television station in the Netherlands has decided against airing it.  Wilders insists that he will air the film anyway, even if he has to use YouTube.   Wilders’ film, and the broader shift in Dutch culture since 2004, reflect what I see as an ongoing global shift away from values once grouped under the label “tolerance.”
(I’ll have more to say about this in another post.)  I think the rally today was a group of people standing in the breach, saying “no” to the “cowboy racism” of Geert Wilders.

One of the things that struck me about seeing this huge gathering was the way that people organized in small groups to come to the rally.  A number of these were 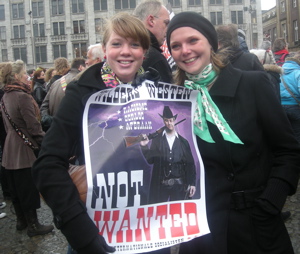 identity groups (i.e., “Queers against Racism”), some were allied political groups (i.e., labor unions) and several were neighborhood groups, organized around specific streets or areas of the city.    Among these I only saw one counter-protester with a small “I (heart) Geert” sign, and on the other side, “I (heart) Mohammed” (presumably Mohammed Bouyeri).   The rally featured lots of bands playing,  Dutch celebrities speaking out against racism, and lots of people standing around holding signs; thus,  in form it was very similar to the various protests I’ve been to in the U.S.   Yet, the content the protest, organized by the national anti-racism organization Nederland Bekent Kleur (the Netherlands recognizes color differences), was markedly different than those in the U.S.   The organizers urged an end to the “climate of hate and fear” which has resulted in a “witch-hunt for Muslims.”  And one protester, quoted by a Reuters reporter, said there should be restrictions on what Wilders can say:

“I think it is embarrassing what Wilders says, for example about tearing up the Koran. It is a very bad example to people to let him say whatever he wants.”

This is the kind of thing you would likely never hear from an American protester and it suggests a radically different view of the kinds of “speech” that a democratic society should allow.    The larger point I wanted to make here is that the real lesson for me in this rally is seeing that there is an active anti-racist movement in the Netherlands that is standing up and fighting back against the racism of their leaders in a way that rarely, if ever, happens in the U.S.